The Battle of Jutland

Last week saw centenary commemorations of the Battle of Jutland (31st May – 1st June 1916).  This sea battle, fought in the North Sea off the coast of Denmark, was a very important battle.  It was a material victory for the German High Seas fleet because they had fewer losses (2551 men) than the British (6094).  However, it was a strategic victory for the British Grand Fleet which maintained its blockade of German ports and control of the North Sea.

Given that Teesdale is quite a long way from the sea, it is interesting to see that several Teesdale men served in the Royal Navy during the First World War as volunteers or regulars before conscription largely removed any choice of service.  Research by volunteers with The Bowes Museum’s First World War Commemorative Project is finding Teesdale men serving in the Royal Navy and the Merchant Navy.  We’d love to hear from anyone who has information or memorabilia about Teesdale’s connection with the navies during the war.

Kevin Richardson’s book ‘Evenwood Remembers’ records three men from Evenwood who lost their lives at the Battle of Jutland.

A memorial service for the three men lost at the Battle of Jutland, and for Private J.H. Raine who was killed in France, was held at St Paul’s Church, Evenwood on 11th June, 1916.

Kevin also records that another Evenwood man, William Purdy, aboard H.M.S. Maidstone, was involved in the battle but, as his ship was in the main fleet, its involvement was mainly in the pursuit after the battle.

If you have any information or memorabilia about Teesdale men and women who served in the armed forces or as nurses, or who were affected by the war, we’d love to hear from you.  You can contact us through the project website www.thebowesmuseumww1.org.uk, by emailing libraryandarchives@thebowesmuseum.org.uk, by post to The Bowes Museum or by telephoning 01833 690606 ext. 208 (answerphone). 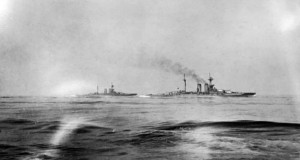