Recently, The Teesdale Mercury printed an article from one hundred years ago that recalled ‘Eggs for the Wounded’, a national campaign that aimed to send eggs to wounded soldiers in order to improve their nutrition.  The initiative was launched in November 1914 and initially aimed to provide 20,000 eggs a week to those wounded in hospital in Boulogne.  This ambition rapidly expanded however, and the target soon became 200,000 per week.  By Easter 1915, this target had been reached and the initiative was highly popular.  Posters, postcards, pins and badges were all produced to help with advertising and recruitment.  The Poultry Magazine declared that “Every British hen should be on active service”.

The Mercury article from 12 April 1916 details that 7,291 eggs were sent to the National Egg Collection for the Wounded between 1 April 1915 and 1 April 1916 for those wounded from Winston, Newsham and the nearby neighbourhood, as well as Whorlton for part of the year.  It then goes on to list the names of those from the local area who had contributed.

The National Egg Collection for the Wounded is a delightful campaign that reveals a charming side to the war.  It provided a relatively simple way for hundreds, across different societies and ages, to feel as though they were contributing to the war effort.

The link to the Teesdale Mercury article is below: 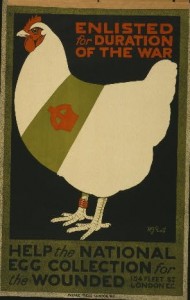