Last week, Fergus Bowes-Lyon, son of the 14th Earl of Strathmore, elder brother to the Queen Mother and uncle to Queen Elizabeth II, was added to our Roll of Honour.

Killed amongst the 20,000 men who fell at the Battle of Loos in 1915, his remains were not found until 2011; nearly a century after his death. Fergus, Captain in the Black Watch, died at the age of 26 leading an attack on the heavily fortified German lines at Hohenzollern Redoubt.  His leg was blown off and he was hit by multiple bullets in his chest and shoulder.

After a visit to Quarry Cemetery in Vermelles, Fergus’s grandson, James Voicey-Cecil, wrote to the Commonwealth War Graves Commission and produced evidence that his grandfather had been buried there and that a grave marker with Fergus’s name had been there until the end of the war.  After further investigation, it was found that Fergus had been named in the records of the burial in 1920, but was not listed on the documentation that had superseded this in 1925.  Following this discovery, a headstone was erected in the cemetery to Fergus Bowes-Lyon that reads: ‘Buried near this spot’.

To visit his profile on the Roll of Honour, click here. 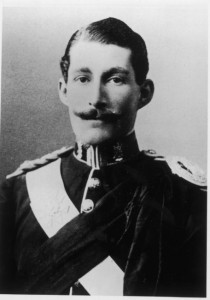