Elizabeth Waine was the daughter of prominent townsman Walker Waine. In the 1911 Census the family are at 52, The Bank and Walker is a Stonemason while his daughter works in a laundry. Walker, his brother Watson and many family members were mentioned frequently in the 'Teesdale Mecury' , taking part in musical activities in the town. Both Walker and Watson played the organ and their daughters sang and acted in various entertainments. Walker Waine was also on the board of the Teesdale Guardians and was Vice-President of the Barnard Castle Co-operative Society.

When Elizabeth's grandmother Phillis Waine died at the age of 80 in 1915, her obituary in the 'Mercury' mentioned her pride in the enlistment of her son Watson, four of her grandsons and one great-grandson. Perhaps it is fortunate that she did not live to hear the news of the deaths in action of two of her grandsons, George Graham Waine in 1916 and William Watson Waine in 1917.

Elizabeth too, in this picture, was not aware of the fates of her brothers and cousins, but saw the need for women to contribute where they could. She married John W Robinson in 1915 and they had four children John, Annie, Ernest and Grace.

Bowling still thrives on the same site in the Bowes Museum, although the ladies section is no longer expected to prepare the green and the rinks are not marked out with white lines. 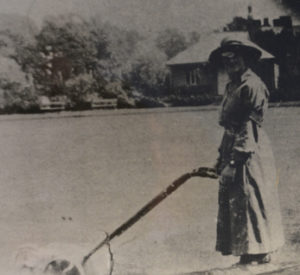